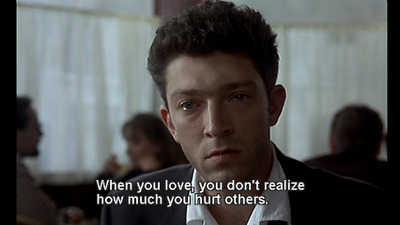 This is Vincent Cassel, as Max in the French movie L'appartement by Gilles Mimouni, 1996. The subtitle displayed above is not his dialogue, but came from the female character in front of him. It's good that the text displayed under his face, so I can capture it and gaze upon this image over and over.  Beautiful, isn't he?

What's written there is an interesting quote concerning the movie's plot and the context of the conversation that occurred.
Trying to extract the real sentence in french, I replay this scene for about thousands of times, mostly in slow motion. I also use google to compare the words I can recognize. Yes, it's so difficult with my very very limited french  vocabulaire (not to mention grammaire) when they speak so quickly, and even slow-audio didn't help much.

After the what feels like the 10th thousands replay, I think this is probably what she said in the original tongue:

Or maybe I still don't make it right.
After all, I want to proclaim that this guy has a voice as sweet and melodious as nightingale's..... ..though I am not really sure I know how nightingales sound